Welcome to the official Hamilton Players blog: All the world's a stage...

Thoughts and ruminations on all things theater...and then some!

Like any specialized industry, theater has it's own set of jargon.  In looking for gifts for your theater friends, you have probably seen the "Theatre Dictionary" on mugs, t-shirts and the like at Cafe Press (www.cafepress.com) 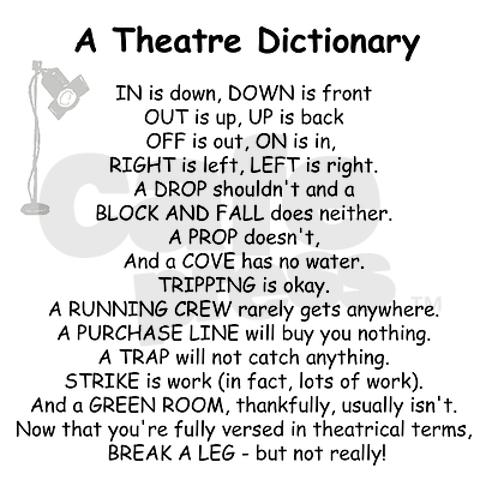 Not sure who came up with it, but it's pretty darn funny, as theater jargon goes.  Not all community theaters have the facilities to require the use of all these phrases, but let's take a look at a few that are specifically used at the Hamilton Playhouse.

HOUSE:  1.) The auditorium area where patrons sit to watch to the show, 2.) The audience

PROSCENIUM:  The opening of the wall between the audience and the stage or, more poetically, the picture frame through which the audience watches the performance.

APRON:  The part of the stage in front of the proscenium

BACKSTAGE: The part of the stage and theater that is out of sight to the audience

BLOCKING: The movement actors do onstage

CHOREOGRAPHY: The dancing actors do on stage

CALL TIME:  The time an actor needs to arrive at the theater

CALL TIMES: (verb) To verbally note the countdown to the start of the show.

FLAT: A wood frame covered in muslin or wood (plywood, Masonite) that is used as backdrops, walls, and masking on a set.

SET:  The stage setting for a scene or show

MASKING:  Flats or curtains used to block the audiences view of something offstage

GREEN ROOM:  The backstage area where actors relax.  It is not usually green.  At Hamilton Players it doubles as the dressing room.

CHEAT OUT: Angling your body (as an actor) to face the audience.

COUNTER:  An actor's stage move to naturally get out of the way of another actor

WINGS:  The out-of-view area to either side of the acting area

THE FOURTH WALL:  The invisible "wall" between the audience and the actors

**Here are a few more phrases you should be familiar with, even though they may fall more into the category of theater lore than actual theater terminology:

BREAK A LEG:  The traditional statement that replaces, "Good Luck!" ...as it is considered bad luck to wish an actor good luck

THE SCOTTISH PLAY:  This is what superstitious actors call Shakespeare's Macbeth. It is considered extremely bad luck to say the word "Macbeth" inside a theater at any time.  Lore says that if you say it, to remove the curse you must leave the theater, spin around 3 times to your left, spit, curse, and then knock to be readmitted.

GHOST LIGHT:  A single, uncovered light left on onstage when the theater is dark (closed). In terms of safety it helps the first person in find the light switches, but superstition says it gives the theater ghosts a light to perform by.

To learn more about theater terminology, check out these links:

Posted by dtrose/Hamilton Players at 8:00 AM No comments: